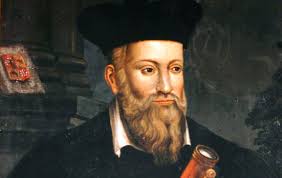 Perhaps not exactly a celebrity, Michel Nostradamus is perhaps more extensively known throughout the world, than some “so-called” modern day celebrities. His reputation as a seer and author of a collection of prophecies has guaranteed continued interest in his life and work to the present day.

Since becoming aware that Nostradamus completed a Will, I have been curious to discover how a person with such acclaimed talents in prophecy would manage their estate and ultimate demise. After all, as lawyers, we regularly say to clients, “if you can tell me when you’re going to die I can tell you exactly what to do with your estate plan.”

Nostradamus is best known for his book Les Propheties, the first edition of which appeared in 1555. The book has been in near continuous publication since his death, attracting a following that, along with much of the popular press, credits him with predicting many major world events. Despite this, the majority of academic critics maintain that the associations made between world events and Nostradamus’s quatrains are largely the result of misinterpretations or mis-translations (sometimes deliberate), or else are so tenuous as to render them useless as evidence of any genuine predictive power. But that hasn’t stopped us looking.

Of particular note Nostradamus is attributed to predicting the death of the French King Henry II in the summer of 1559.

The young lion will overcome the older one, On the field of combat in a single battle;
He will pierce his eyes through a golden cage, Two wounds made one, then he dies a cruel death.

Indeed Henry did succumb to injuries following a jousting incident when a lance pierced his visor and the shards splintered, injuring his eye. While many of the details in the quatrain appear accurate, sceptics assert that some of the symbols are inconclusive or inaccurate.

Similarly, Nostradamus is credited to predicting the rise of Adolf Hitler more than 300 years before his birth.

From the depths of the West of Europe, A young child will be born of poor people,
He who by his tongue will seduce a great troop; His fame will increase towards the realm of the East.

Beasts ferocious with hunger will cross the rivers, The greater part of the battlefield will be against Hister.
Into a cage of iron will the great one be drawn, When the child of Germany observes nothing.

Hitler, who was born to poor parents in 1889 in Western Europe, used highly refined oratory skills to mobilize the Nazi party in Germany in the years following World War I. Germany, as a part of the Axis powers, also allied with Japan in the East. While many believe ‘Hister’ to be a typo, it’s also an old name for the Danube River.

By 1566, Nostradamus’s gout, that had plagued him for many years, turned into edema . On 17 June 1566 he summoned his lawyer to draw up an extensive Will, bequeathing his property plus 3,444 crowns (around $450,000 AUD today), minus a few debts, to his wife (pending her remarriage), and to a trust for his sons (pending their 25th birthdays) and his daughters (pending their marriages).
This was followed on 30 June 1566 by a much shorter codicil, essentially an addendum or addition, to the previous Will which still stands.

On the evening of 1 July, he is alleged to have told his secretary Jean de Chavigny, “You will not find me alive at sunrise.” The next morning, it was reported, he was found dead.
Interestingly, the opening paragraph of the Will includes the phrase “Just as there is nothing more certain than death, nothing is more uncertain than its hour”. This is a rather odd statement considering Nostradamus’ vocation isn’t it?

The Will is full of great lines which, some sadly, are no longer used in modern day estate planning. However, some I would advocate for their return, such as;

The latter [referring to Nostradamus himself], considering and being in his full understanding, resting well and seeing and understanding, and although all-told not being weakened, because of his ancient age and certain bodily illness, by which he is at present confined, wishes to provide while he is alive for his possessions that God the Creator has given him and lent him for this mortal world, to the end that after his decease and passing, there will be no question, process and difference over these possessions.

Firstly, as a good, true and faithful Christian, he has recommended his soul to God the Creator, begging Him that when it will be His good pleasure to call him, that it may please Him to collect his soul into the eternal Kingdom of Paradise.

There are many other specific gifts of a very small nature, each reflecting beliefs at the time relating to the continuance of good deeds and of provision for the clergy as encapsulated in the following paragraph.

Nostradamus’ Will, although not necessarily complicated, is certainly lengthy and difficult to read through modern eyes. There is a prevailing belief in the community, that the style of writing use by lawyers has changed little in 500 years . I am inclined to disagree.

A carefully crafted Will and estate plan should consider each and every word, phrase and sentence in the context of the whole document. It is critical to remember that after your death you are not around to explain what it was you actually meant.

There are too many examples of small errors or ambiguities in Will documents that lead to very expensive Court applications. It is a very important document and each clause is inserted for a very important reason. 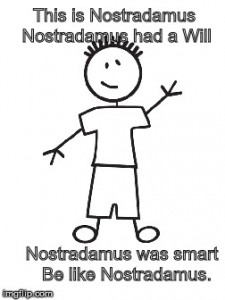 Irrespective of the language used, Nostradomus’ Will provides a fascinating insight into societal beliefs and values during the mid-sixteenth century. When examining this Will, one thing remains certain; while the jury is out as to whether or not Nostradamus knew when he was going to die, he was wise enough to ensure he had a Will before that day arrived.

Click here to see a copy of Nostradamus’ Will.